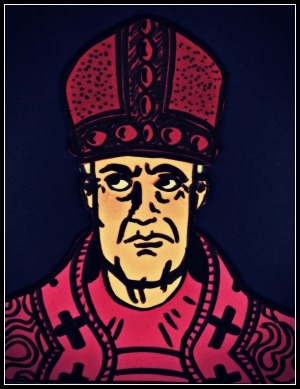 The relative peaceful relationship with the Roman empire during Pope Victor’s time came crashing down right on St. Zephyrinus’s head. The new emperor,Severus,declared war on Christians around the year 202,and he forbid anyone from converting to the faith under threat of the severest penalties in what became one of the bloodiest persecutions of Christians known at that time. Not only that,Zephyrinus was still confronting the same ole various heresies(pesky Gnostics will just not go away),and now apostates(I didn’t know that word either,it means a person that renounces religion),and also a group trying to set up a rival Bishop just for the purpose of undermining him. On top of that,one of the leading theologians of the time,Hippolytus,was frustrated with how Zephyrinus was handling all of this(especially his actions towards herectics,which was viewed as weak to some),and went around Rome calling the Pope an imbecile,or whatever word they had for imbecile back then. Whew. I’d say he was born under a bad sign if I believed in Astrology. This Pope may have had a rough term,but the last word in how we should view him belongs to Theodotus,one of the herectics he opposed. Theodotus treated him with much contempt at the time,but was later quoted as saying that Zephyrinus was “The greatest defender of the divinity of Christ”. Coming straight from his enemy’s mouth,that was not a bad legacy to leave,in spite of his less than stellar time as Pope.

One of three Popes from Africa,St.Victor served as Bishop of Rome during a relatively peaceful time. Peaceful for Christians…..but for heretics? Not so much. Victor was excommunicating heretics left and right,gnostics,montanists,a guy named Theodotus;all felt the wraith of Victor. He even went so far as to excommunicate Eastern Christians who were still celebrating Easter on the Jewish day of Passover,and not on the Sunday after Passover like they were in the west. This was a bit much,and his fellow bishops and priests let him know it,so he backed off of this unpopular position and lifted the excommunications on those Christians.
Victor was one of the first Popes to have direct dealings with the Roman Empire. Emperor Commodus was sympathetic to Christians,and a member of his court(Marcia,who may have been a Christian herself),worked with Victor on getting Christians pardoned and released from slave labor in the mines of Sardinia,among them was future Pope Callixtus.
Victor was the first Pope to celebrate Mass in Latin instead of Greek,as Latin was the prominent language of Northern Africa at the time. The Latin Mass must have been beautiful to hear because it stuck around for about 1800 years after Victor passed away. Dominus vobiscum! (Psst,that’s Latin for “The Lord be with you”)

Born in Greece,Eleuterus had been a deacon of the Church since Pope Anicetus. He issued(or rather,re-issued),a decree that no food should be despised by Christians. Being that was there was no Cracker Barrel two thousand years ago,he would have not known of the dreaded Hashbrown Casserole,for he surely would have banned any sane person from eating this. The food decree was in response to various heretical Christian groups,such as the gnostics and montanists,limiting what their followers could and could not eat. Legend has it that he sent the first Christian missionaries to the British Isles,but there is much debate over whether this is true or not. The date of his death is the first concrete date in the history of the Papacy. He was first buried on Vatican Hill,then moved near the Pantheon,and finally,in 1591,his remains were moved again to the Church of St. Susanna. His feast day is May 26th,which will always be easy to remember because it is my wife’s birthday!

Continuing our Easter theme,previous Popes had been celebrating Easter on the Sunday following Passover,Pope Soter formally inaugurated the day as an annual festival in Rome. St. Soter also declared that marriage was a sacrament only valid if blessed by a priest. He sent money collected in offerings to the Church of Corinth(among other cities),so it could be distributed to the poor.
The bishop of Corinth,St.Dionysius,was so greatly impressed with the Bishop of Rome that he wrote a letter praising him saying,”For this has been your custom from the beginning, to do good to all the brethren in many ways, and to send alms to many Churches in different cities, now relieving the poverty of those who asked aid, now assisting the brethren in the mines by the alms you send, Romans keeping up the traditional custom of Romans, which your blessed bishop, Soter, has not only maintained, but has even increased, by affording to the brethren the abundance which he has supplied, and by comforting with blessed words the brethren who came to him, as a father his children.”
As the Bishops of Rome start emerging more clearly in History,we can start to get a better grasp on some of these incredible men. Not only were they a guiding light for new Christians and Christianity,they were also risking their very lives to continue to spread the word in this dangerous time. There will be Popes who won’t live up to the mantle that they are given,but then there were also shepards like St. Soter,who gave their lives over to declare the good news to his flock that Jesus lived,died and was resurrected for the benefit of all mankind.