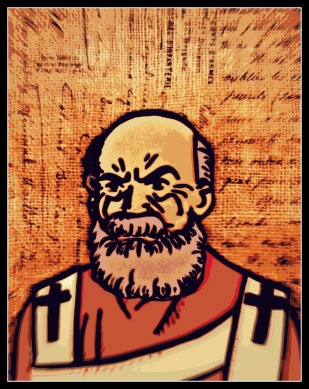 Angry Pope Theodore I was the next in the line for Popes having to constantly battle the eastern Church over the nature of Jesus. Monothelitism is the belief that Jesus only had one will,a Divine one,as opposed to our Catholic belief that Jesus had both a human and Divine will. This back and forth between the western and eastern Churches over this had been going on for….(forever it seems since this is all I’ve written about on this blog for weeks now). Pope Theodore refused to recognize the new patriarch of Constantinople,Paul,because the previous guy(Pyrrhus)still believed in the Jesus of only one nature when he passed away,which Paul never corrected. Pope Theodore was still irritated because Pyrrhus had once come to Rome and denounced Monothelitism to the Pope’s face,then after leaving town flip-flopped back. This made the Pope so freaking mad that he supposedly wrote out the excommunication of Pyrrhus using consecrated wine on the tomb of St Peter as his desk. Supposedly(I doubt it was this dramatic but it’s still a cool image). On and on went the battle of wills between the two Churches over the nature of our Lord. The emperor of Constantinople was so sick of hearing about it that he jailed a Papal ambassador when the sensitive subject came up. Pope Theodore was sick of all of this too and called for the Lateran Council of 649 to condemn the issue and hopefully put it to rest once and for all. Unfortunately he passed away before the Council could meet and it would be the next Pope(Saint Martin I),who would bear the full brunt of this strife between the two Churches. This wouldn’t be settled for another 40 years after Theodore(six more weeks for me),so maybe by then I’ll learn to spell “Monothelitism” without the spellcheck correcting me.